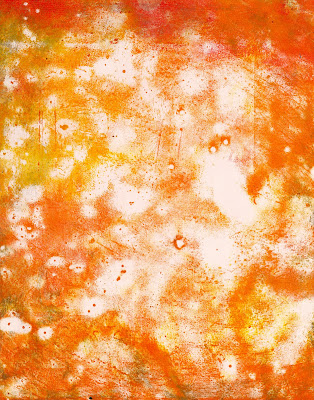 Posted by Tony Renner at 1:10 AM No comments: 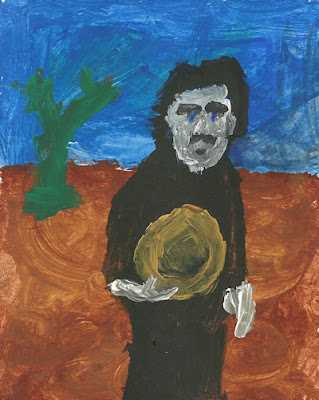 
Don Van Vliet, an artist of protean creativity who was known as Captain Beefheart during his days as an influential rock musician and who later led a reclusive life as a painter, died Friday. He was 69 and lived in Trinidad, Calif.

The cause was complications of multiple sclerosis, said Gordon VeneKlasen, a partner at the Michael Werner gallery in New York, where Mr. Van Vliet had shown his art, many of them abstract, colorful oils, since 1985. The gallery said he died in a hospital in Northern California.

Captain Beefheart’s music career stretched from 1966 to 1982, and from straight rhythm and blues by way of the early Rolling Stones to music that sounded like a strange uncle of post-punk. He is probably best known for “Trout Mask Replica,” a double album from 1969 with his Magic Band.

Mr. Van Vliet’s life story is caked with half-believable tales, some of which he himself spread in Dadaist, elliptical interviews. He claimed he had never read a book and had never been to school, and answered questions with riddles. “We see the moon, don’t we?” he asked in a 1969 interview. “So it’s our eye. Animals see us, don’t they? So we’re their animals.”

Don demonstrated artistic talent before the age of 10, especially in sculpture, and at 13 was offered a scholarship to study sculpture in Europe, but his parents forbade him. Concurrently, they moved to the Mojave Desert town of Lancaster, where one of Don’s high school friends was Frank Zappa.

His adopted vocal style came partly from Howlin’ Wolf: a deep, rough-riding moan turned up into swooped falsettos at the end of lines, pinched and bellowing and sounding as if it caused pain.

“When it comes to capturing the feeling of archaic, Delta-style blues,” Robert Palmer of The New York Times wrote in 1982, “he is the only white performer who really gets it right.”

He enrolled at Antelope Valley Junior College to study art in 1959 but dropped out after one semester. By the early 1960s he had started spending time in Cucamonga, Calif., in Zappa’s studio. The two men worked on what was perhaps the first rock opera (still unperformed and unpublished), “I Was a Teenage Maltshop,” and built sets and wrote some of the script for a film to be titled “Captain Beefheart vs. the Grunt People.”

The origins of Mr. Van Vliet’s stage name are unclear, but he told interviewers later in life that he used it because he had “a beef in my heart against this society.”

By 1965 a quintet called Captain Beefheart and His Magic Band (the “his” was later changed to “the”) was born. By the end of the year the band was playing at teenage fairs and car-club dances around Lancaster and signed by A&M Records to record two singles.

The guitarist Ry Cooder, then a young blues fanatic whose skill was much admired by Mr. Van Vliet, served as pro forma musical director for the next record, “Safe as Milk” (1967), which showed the band working on something different: a rhythmically jerky style, with stuttering melodies. The next album, “Strictly Personal” (1968), went even further in the direction of rhythmic originality.

But it was “Trout Mask Replica” that earned Mr. Van Vliet his biggest mark. And it was the making of that album that provided some of the most durable myths about Mr. Van Vliet as an imperious, uncompromising artist.

The musicians lived together in a house in Woodland Hills, in the San Fernando Valley; what money there was for food and rent was supplied by Mr. Van Vliet’s mother, Sue, and the parents of Bill Harkleroad, the band’s guitarist (whom Mr. Van Vliet renamed Zoot Horn Rollo). One persistent myth has it that Mr. Van Vliet, who had no formal ability at any instrument, sat at the piano, turned on tapes and spontaneously composed most of the record in a single marathon eight-and-a-half-hour session.

What really happened, according to later accounts, was that his drummer, John French (whose stage name was Drumbo), transcribed and arranged music as Mr. Van Vliet whistled, sang or played it on the piano, and the band learned the wobbly, intricately arranged songs through Mr. French’s transcriptions.

Band members’ accounts have described Mr. Van Vliet as tyrannical. (Both Mr. French and Mr. Harkleroad have written memoirs with dark details about this period.)

Mr. Van Vliet’s eccentricity and his skepticism about the music industry had much to do with why his music remained mostly a cult obsession. His band was offered a slot at the Monterey International Pop Music Festival in 1967, but Mr. Cooder had quit a week before, and Mr. Van Vliet was too spooked to perform. In the following years, when the band was at its creative peak, it played relatively few concerts.

The Magic Band’s first records after “Trout Mask Replica,” starting with “Lick My Decals Off, Baby,” had a more mature sound, but by “Clear Spot,” in 1973, the band had turned toward blues-rock. It later made a few ill-conceived concessions to commercialism, and in 1974 the band quit en masse after the critically panned “Unconditionally Guaranteed.”

After a long falling-out, Mr. Van Vliet reunited with his old friend Zappa to tour and make the album “Bongo Fury” in 1975, then assembled a new band to record “Bat Chain Puller,” which was never released because of contractual tie-ups. Parts of it were rerecorded in 1978 for an album released by Warner Brothers, “Shiny Beast (Bat Chain Puller).”

When his business affairs cleared in the early 1980s, Mr. Van Vliet made two albums for Virgin, “Doc at the Radar Station” and “Ice Cream for Crow,” with a crew of musicians who had idolized him while growing up. The albums were enthusiastically received.

But “Ice Cream for Crow” was his last record; in 1982 he quit music to focus on his painting and moved to Trinidad, near the Oregon border, with his wife, Jan, who is his only survivor.

In the exhibition catalog to a show at the San Francisco Museum of Modern Art, the museum director, John Lane, wrote of Mr. Van Vliet’s work, “His paintings — most frequently indeterminate landscapes populated by forms of abstracted animals — are intended to effect psychological, spiritual and magical force.”

Some of the images were a continuation of his songwriting concerns, especially those involving animals. A lot of his work dwells on the beauty of animals, on animals acting like humans and even on humans turning into animals. In “Wild Life,” he sang, “I’m gonna go up on the mountain and look for bears,” and in “Grow Fins,” an extraordinary blues from the album “The Spotlight Kid” (1972), he threatened a girlfriend that if she didn’t love him better he would turn into a sea creature.

Mr. Van Vliet had rarely been seen since the early 1990s and seldom at his gallery openings.

“I don’t like getting out when I could be painting,” he told The Associated Press in 1991. “And when I’m painting, I don’t want anybody else around.” 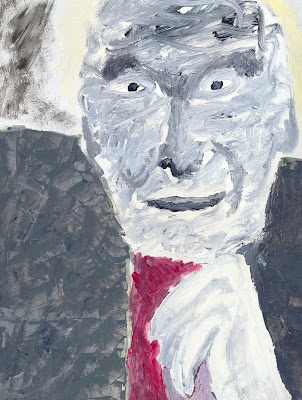 Dave Brubeck, pianist, composer and bandleader, died Wednesday morning, Dec. 5, 2012, at Norwalk Hospital, in Norwalk, Conn., one day before his 92nd birthday. Brubeck died on his way to “a regular treatment with his cardiologist,” said longtime manager-producer-conductor Russell Gloyd.

Brubeck’s career spanned more than 60 years, comprising nearly the entire existence of American jazz since World War II. He was revered for recordings with his legendary Dave Brubeck Quartet, including “Take Five” and “Blue Rondo à la Turk.” The album on which they appeared, Time Out, became one of the best-selling jazz recordings of all time. He was revered for his daring use of rhythm and unusual time signatures, both of which transcended previous conceptions of swing rhythm.

Brubeck was born on Dec. 6, 1920, in Concord, Calif. His mother was a classically trained pianist who introduced him to the instrument at a young age, and he was performing professionally by the age of 13. Brubeck enrolled as a zoology major at the College of the Pacific in Stockton, Calif., but became highly involved in the school’s music department. From 1942–1943, he led the school’s 12-piece big band.

Around the same time, Brubeck began to study classical composition at Mills College in Oakland, Calif., under French composer Darius Milhaud. Brubeck’s studies under Milhaud subsided during World War II, when in 1944 he enlisted in the U.S. Army. He led a service band in Europe, was discharged in 1946 and then resumed his musical training. Brubeck’s studies with Milhaud influenced his experimentation with odd time signatures and classically inspired counterpoint.

A pioneer who did not accept the idea of “pigeonholing,” Brubeck was an integral force in venturing outside of the accepted boundaries of jazz. He was a lifelong advocate of the genre’s racial integration, performing in African American clubs throughout the South in the 1950s.

He was also an important figure who brought jazz to the forefront of academia, and his groups became wildly popular at colleges throughout the 1950s and ’60s. In 1949, Brubeck and a group of fellow students at Mills College formed the Jazz Workshop Ensemble, which would later record as The Dave Brubeck Octet.

Brubeck’s octet often performed standards by other composers, but this was the pianist’s segue as a leader into 5/4, 9/8 and 11/4 time signatures, as opposed to traditional two and four counts. That same year, Brubeck formed his namesake trio alongside percussionist Cal Tjader and bassist Norman Bates. He was joined by alto saxophonist Paul Desmond in 1951, resulting in the creation of the legendary Dave Brubeck Quartet. With the newly formed quartet, Brubeck continued his advocacy of jazz on college campuses by recordingJazz At Oberlin in 1953. He also solidified his position as a public figure when he became the first modern jazz musician to appear on the cover of Time magazine on Nov. 8, 1954.

The “classic” Dave Brubeck Quartet would not form until the late 1950s, with the additions of drummer Joe Morello in 1956 and bassist Gene Wright in 1958 alongside Brubeck and Desmond. The quartet’s 1959 album Time Out was the first jazz LP in history to sell a million copies, and many of the tunes on the album have become standards. The album opens with the Mozart-inspired “Blue Rondo à la Turk,” which Brubeck composed in 9/8 time.

The album also features “Take Five,” a tune composed in 5/4 time, which made the Billboard singles chart in 1961 and remains one of the most recognizable jazz recordings of all time. The quartet performed together until 1967, when Brubeck, a self-proclaimed “composer who plays the piano,” left to focus more on composition and arrangement. Brubeck, Morello and Wright would later reunite in 1976 to perform and record in celebration of the 25th anniversary of the classic quartet’s initial formation.
Posted by Tony Renner at 3:10 PM No comments: 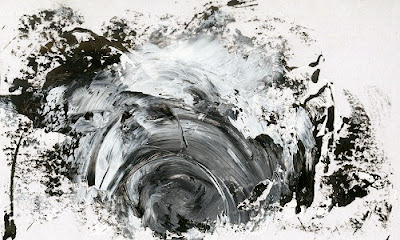 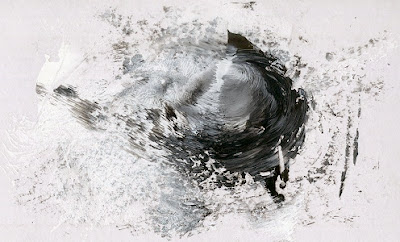 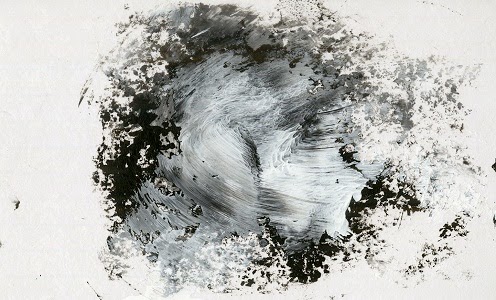